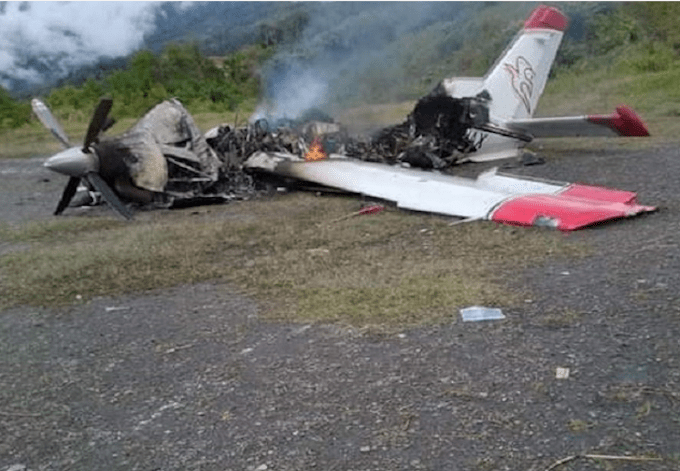 The American pilot and two passengers had disembarked from the aircraft before it was fired upon, causing a blaze that destroyed the aircraft.

A Xian Aircraft MA60 operated by Chinese carrier Joy Air experienced a mechanical problem and had to be fixed on the ground in minus 36 degrees Celsius in a remote part of China’s northwest Xinjiang province.

The aircraft was found to have a brake problem after completing a scheduled flight on 4 January from Altay prefecture to Fuyun county’s airport, both of which are in the northern part of Xinjiang bordering Mongolia.

There was no spare MA60 brakes available in Xinjiang, so it was sourced from Changsha, a city in eastern China. Maintenance crews dispatched to the scene installed the new brakes and the MA60 departed Fuyun on 7 January.

Australian charter carrier Skytrans has said it would be willing to provide air transportation services to Dunk Island if it were turned into a quarantine station, as proposed by outspoken conservative Australian politician Bob Katter.

He says they are open to operating such aircraft to Dunk Island to transport people undergoing quarantine.

Katter is an independent member of Federal parliament who is lobbying the national and state government to rebuild the abandoned resort on Dunk Island as a quarantine station.

Management at Nok Air estimates the Thai low-cost carrier only has six months of funds left.

The airline – which is in court-appointed bankruptcy protection so it can try to reach an agreement with creditors to reduce its debts and agree on a financial turnaround plan – says the six-month projection is assuming that there is no further deterioration in market demand caused by COVID-19.

The airline has till 15 March to submit its financial turnaround plan to the Central Bankruptcy Court.

Indonesia’s government has allowed the resumption of ‘pioneer’ flights linking the West Papuan city of Timika to the remote towns of Kaimana and Fak Fak.

Indonesia’s ministry of transport subsidizes ‘pioneer’ flights to some remote parts of Indonesia including West Papua.

India’s SpiceJet Launches Services To Only Airport In Sikkim

Indian carrier SpiceJet has launched a daily service from New Delhi to Pakyong Airport, which is the only airport in north-eastern India’s scenic mountain province of Sikkim. The airline is operating De Havilland Aircraft of Canada Dash 8-400 aircraft on the route.