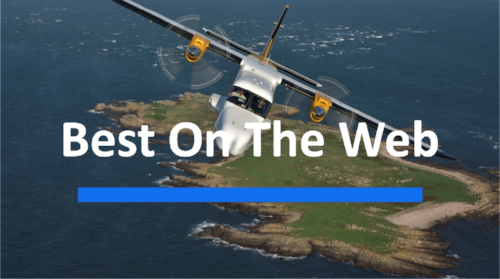 De Havilland Aircraft of Canada has secured its largest order for Dash 8 Q400 turboprops since it bought the programme from Bombardier in June.

At the Dubai Airshow, it announced that Nigerian company Elin Group has signed a firm order for three Q400s. The Nigerian conglomerate plans to use the aircraft for fly-in fly-out charter services for Nigeria’s resource sector.

A new UK government-backed project aims to convert avgas-powered nine-seat Britten-Norman BN-2 Islanders to hybrid-electric powertrains that can produce savings that pay for themselves in three years. Project Fresson’s conversions involve replacing standard powerplants on the nine-seat turboprop with battery-connected electric motors backed by an engine, it says. The project, which is expected to be completed by 2024, includes partners such as engine- manufacturer Rolls Royce and battery researchers from Delta Motorsport and Warwick Manufacturing Group.

Sri Lanka’s FitsAir plans to launch thrice-weekly scheduled services between the newly-opened Jaffna airport and Chennai, India. The airline is looking to operate its sole ATR 72-200 on the route, it says. FitsAir operates cargo flights internationally using the ATR 72-200 and an Airbus A300, as well as flies domestic passenger services using two Cessna 208B Grand Caravan EXs.

Myanmar’s Air KBZ has launched a new route between Mandalay and Imphal, the capital of the Northeast Indian state of Manipur, using ATR aircraft. The thrice-monthly service is being further developed into a scheduled service from a charter operation, officials say. It is significant as it is one of the first moves in the Indian government’s ‘Act East’ plan to connect rural Northeast India to Southeast Asia, local observers add.

The Nepalese Army has taken delivery of its first Indonesian Aerospace CN-235-220 turboprop. The Indonesian-built turboprop, which was jointly developed with Spanish manufacturer CASA (now part of Airbus), was delivered in a quick-change format. The aircraft can switch between transport, cargo, paratroop, medevac, maritime patrol and VIP transport configurations easily, the army says.